Single knots are considered the best method of knotting producing a tiny knot for each individual hand-tied hair. Two or three individual hairs can be single knotted at one time speeding up the process to the detrimental of creating a larger knot with less aesthetically pleasing finish.

Double knots literally involve knotting hair twice to produce a double knot which provides a stronger, more robust knot. The resultant knots are however even more visible under close inspection.

Bleaching the knots is just meant to make the knots less detectable. They won't be clear or totally invisible. The bleached hair will help to hide the knots in about 1/4 – 1/2 inch fronts. It is a method of making the hair appears as if it is growing from the scalp. It gives a realistic view effect. If the original hair color is Black, Dark Brown, Medium Brown or Brown, then knots that hold the hair onto the base will be slightly lighter and will be much less visible. 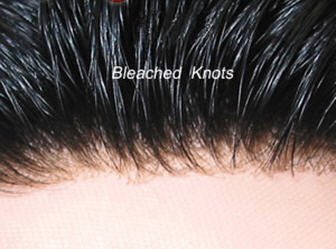 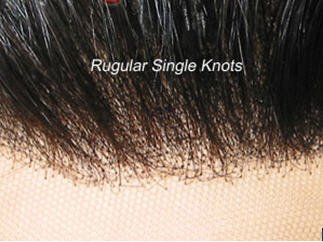 Of course, Bleached Knots have its disadvantage: it's bad to the hair quality and it will be easy to shed, which is the deadly reason.

So, we recommend that you'd NOT bleach the knots through the entire head, but around perimeter hairline 2 inches. Besides, to the wigs which couldn't be bleached, we recommend single knots instead of bleached knots.

It means the knots are hidden under the inside mesh (It has three pieces of mesh), and completely invisible, giving the impression the hair is growing out of the scalp.

Following is the top view of invisible knots photo. 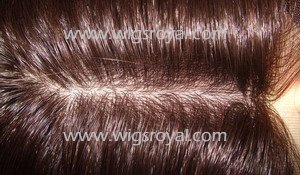 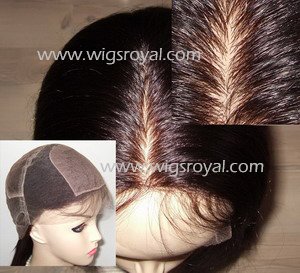